Here’s What Happens When You Get Shot in Laser Tag 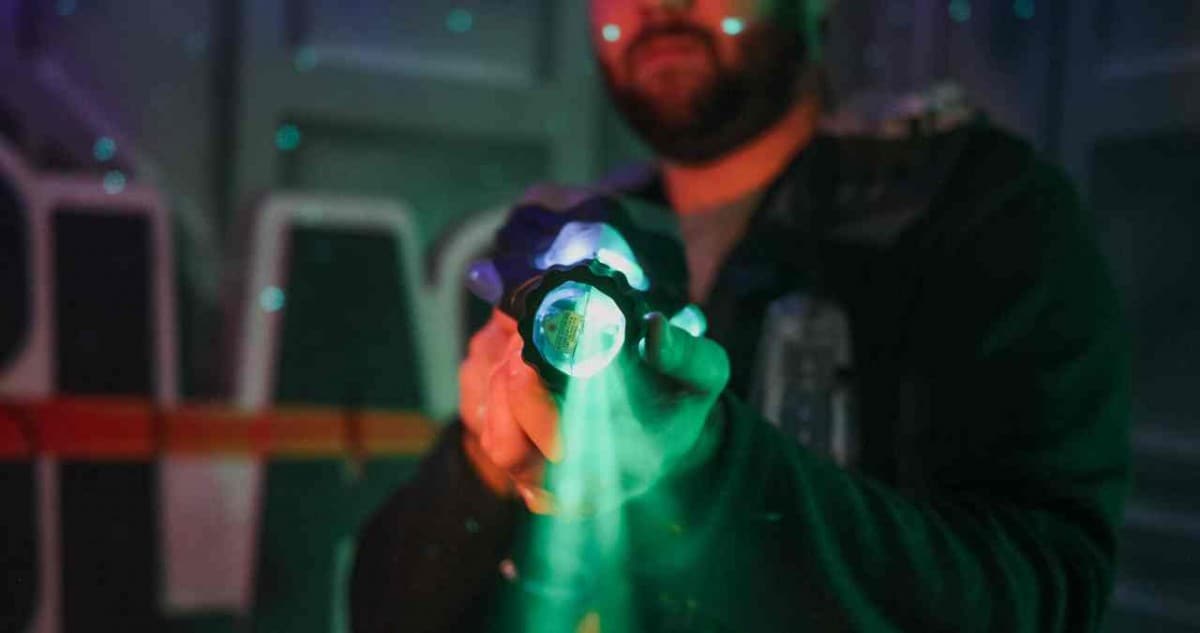 Laser tag has become an increasingly popular pastime over the last few decades. A choice activity for birthday parties and team building, laser tag appeals to both kids and adults. However, those who have never played before might be wondering if getting ‘shot’ in laser tag hurts or is dangerous.  Fortunately, getting shot in laser tag does not hurt and is not dangerous.

What happens when you get shot in laser tag? Depending on the specific rules of game-play, the player who has been shot will either be eliminated from the game, or the damaged player’s vest will vibrate in the location of the hit, and their rifle will deactivate temporarily and then re-activate (usually within 30 seconds.)

Additionally, there is fascinating science behind how the laser rifles and the vests’ sensors communicate with one another to make the game of laser tag possible. We’ll go into detail as to how these real live shooter games work, and what is going on from a scientific standpoint when one is shot.

When Was Laser Tag Invented?

The technology and concept of laser tag was invented in 1982 by a man named George Carter III. He was influenced by shows like Star Wars and Star Trek, both of which feature guns with laser beams. Ah, laser beam guns. You gotta love the 80’s.  So, George decided to construct real-life “laser” guns and build an arena where one could shoot them at friends.

How Do Laser Tag Guns Work?

The first important thing to know about laser guns is…hold the suspense… they don’t use lasers! Gasp! Shocking. I know.

Instead, laser guns use infrared beams of amplified light. Inside each laser gun is an emitter of collimated beams of these infrared lights that are highly directional and stimulate emission radiation. Whoa! What are we talking about here?

In layman’s terms: a laser tag gun is essentially a flashlight made in the shape of a gun.  The light is created by thin infrared lights that are specific to each player.

The vests then are simply infrared receivers that absorb the light rays and use optical reasoning to detect specific signals… because @science.

Why Do Laser Tag Guns Use Infrared Light Instead of Real Lasers?

There are a few good reasons why laser guns are not made with actual lasers.

What Happens When You are Shot in Laser Tag

In easier, traditional game-play (the kind kids play for their birthday parties), when a player is successfully “shot,” the damaged player’s vest will vibrate in the location of the hit and their laser gun will be temporarily deactivated. The vests will inform the player through sounds and typically a voice when they are back online.

If you attempt to shoot your gun when deactivate, the gun won’t emit either a laser or sound.  It is smart at this point to go into hiding so that once you’re back online, you aren’t instantly hit again. Some particularly annoying players may follow you around when you’re deactivated to continue to shoot you once you’re re-activated. These people are the worst and you should question being their friend after the game. 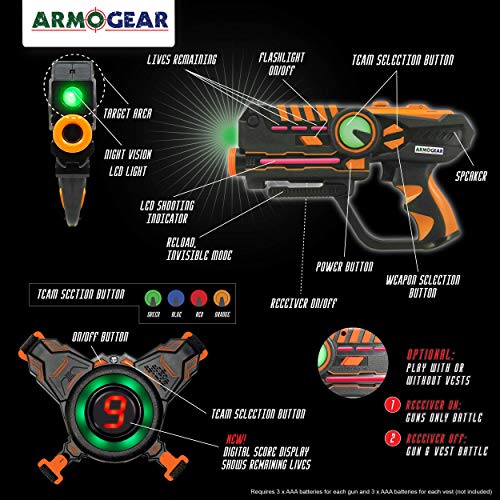 Laser tag guns operate like television remotes in that they use their collimated infrared light to send a signal to someone’s vest that they’ve been ‘hit.’

The vests worn by each player in laser tag have a collection of sensors inside the vest that detect when the light from a gun hits the sensors directly. The lasers are traditionally located in three or four separate hit zones in the vest: front middle, left hand with shoulder, right hand with shoulder, and the back middle.

There are varying degrees of intelligence in these vests. The simple ones detect when the LED's make direct contact with the vest sensors and temporarily disable that player from being able to play for a minute. The vest will also vibrate when a player is ‘hit.’

The more advanced laser tag vests not only detect light as it hits directly but can also accurately ID which player is the culprit. This form of identification is made possible by encoding each individual infrared light inside the various laser tag guns.

The sensors detect the light given off at a certain frequency, which sends the vest the following information: the ID name of the player who ‘did the damage,’ the color of the player, and the amount of damage the hit amassed. 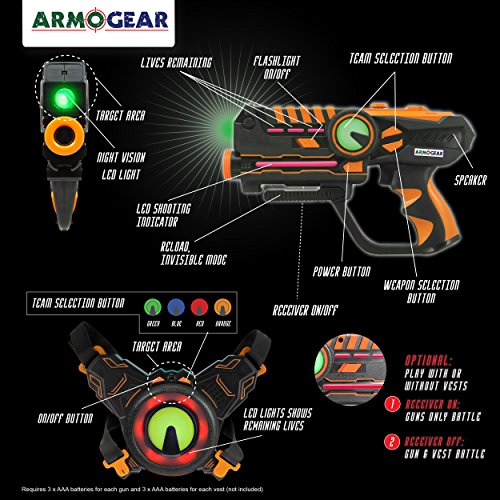 What Happens if You are Shot in the Eye with A Laser Tag Gun?

Since laser tag guns are made with infrared light and not laser beams, nothing damaging will happen to someone’s eye if you accidentally shine your laser tag gun in their eyeball.

However, if you were to hold that person down and mercilessly shine the light into their unblinking eye for an extending period, then sure! That will do some real damage.

In general, it is best to avoid aiming your laser gun at someone’s eye.

The Key Take Away?

Laser tag is a super fun game, and arenas can be found locally in most large cities and towns. Inspired by science fiction novels and films like Star Wars, these laser guns and vests are a thing of the future (especially since they were developed in the 1980s.) The technology behind laser tag is very precise and involves more physics and mathematics than may meet the eye.

Laser guns are not made with lasers, but with LED's that use infrared lights.  These lights are encoded. It’s simple, effective, and makes for a darn good time!

If you are hit during the game, depending on your game-play rules, you’ll either be instantly eliminated (like paintball) or you’ll be temporarily de-activated until you can reboot (usually within 30 seconds.)

Laser tag is a safe and fun way to play a harmless real-life shooter game. After all, what better way to bond with your friends and family than in a good old game of ‘shoot em up’?