Like a lot of questions, it takes more than a simple yes or no to give good advice on whether a 4-year old could or should play laser tag.

Some four-year-old children are big enough to use the equipment and confident or adventurous enough for any game setting or playmates. Other kids of the same age might not be ready for any laser tag play.

If they aren’t going to enjoy it, what’s the point? Can a 4-year old play laser tag?

There are a number of things to consider when you try to decide if a young child that you know is ready to try laser tag. Is the child able to understand the strategy of the game? Are they tall and strong enough to wear the sensor vest if the game system they will be using requires one? Who will they be playing with?

Laser Tag can be fun for two people to play, or it can be played with teams of whatever size you have enough equipment for.

If you’re trying to figure out if a child as young as four is ready to give it a try, you should focus at least as much on how and where the game will be played and who will be playing as you do on the child’s ability to use the equipment and understand the rules and the point of the game.

Things to Consider About Letting a Child Play Laser Tag

There isn’t much that can go wrong if you let a child play laser tag and find out that they just aren’t ready. For a child as young as four, they might get run over by other kids who are playing, or they might get overwhelmed by certain aspects of the play area.

Neither bumps and bruises nor a temper tantrum are the end of the world. Still, if the goal is to have fun, you should do what you can to figure out whether they’re ready before you give it a try.

Through the rest of this article, we’ll examine the 5 W’s that will help you make the call.

How Is the Game Going to Be Played?

There is a big difference between giving a 4-year old child a laser tag gun that contains hit sensors and spending some time running around the backyard playing laser tag with them on the one hand, and sticking them inside of a heavy vest before sending them into a dark, strobe-lit room with dozens of kids older than they are.

Individual play for a handful of people would be a good way to introduce a young child to laser tag. It would give you more control over the situation and give you much better chances of making sure that everyone playing is taking care of the young player.

Team play in a similar setting would probably be fine too—it just might be a little bit harder for the child to keep track of who is on their team and who they are playing against. 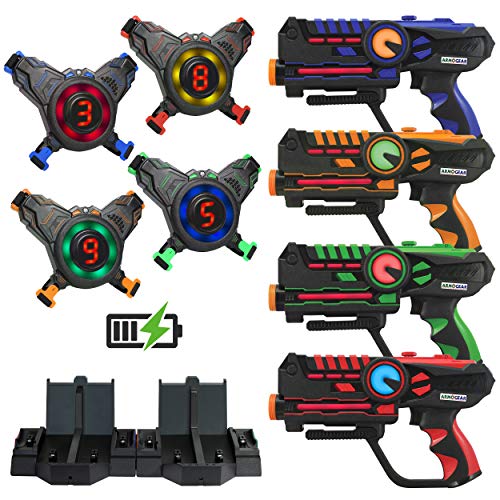 Where Is the Game Going to Be Played?

Laser Tag game equipment can be pretty expensive, so not everybody has the necessary equipment at their home. When that is the case, you have to choose whether to buy equipment or to go to one of the amusement centers or dedicated Laser Tag play spaces.

Businesses that have Laser Tag for amusement purposes might take the decision out of your hands.

Many amusement parks and Laser Tag centers have minimum age or height requirements. Typically, 6 or 7-years of age is the youngest that they will permit to play in their center.

If they use a game system that requires players to wear a sensor vest that registers opponents’ hits, you might find that your four-year-old isn’t tall enough or strong enough to move around with the vest on. 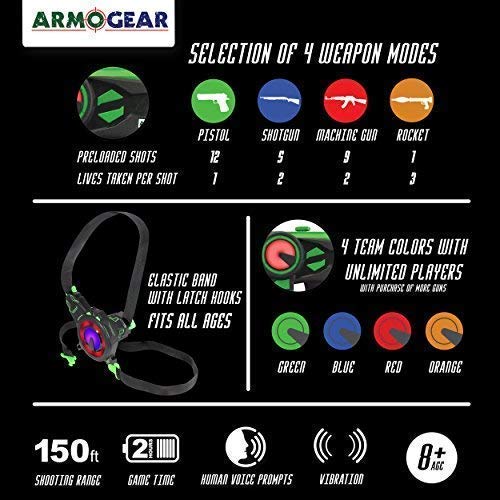 Who Is the Game Going to Be Played With?

As we noted earlier, the other people playing the game will make a big difference in how a 4-year old does in the game and even whether it’s a risk in terms of their safety.

When it is family and close friends playing, everyone will probably watch out for the young player and make sure that they are safe and having fun. A big group of young kids surging on adrenaline (and sugary snacks) might lose sight of the fact that one of the players is a lot smaller than everyone else.

Of course, you could rent the Laser Tag play area at an amusement center for friends and close family. Playing with a 4-year old child doesn’t necessarily mean that you have to play in the back yard or around the house.

But the lights and sounds can be overwhelming for a child of that age, and the barriers and obstacles can make it easy for them to get lost. And it should go without saying that it probably isn’t a good idea to turn a large group of four-year-old children loose in a play center on their own. 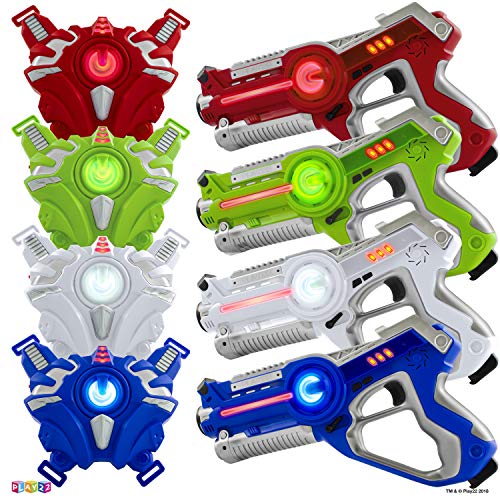 What Are You Using to Play the Game?

Some Laser Tag equipment is a lot better suited to a smaller or younger player. Most old equipment and certain styles of newer equipment rely on a vest with sensors to register hits from opponents.

Whenever that is the case, the first thing you’ll need to figure out is whether the child is big enough to wear the equipment that the game requires. If you’re planning on playing at an amusement center, it is a good idea to find out ahead of time.

At the same time, it’s important to note that a lot of Laser Tag equipment is not only expensive but also delicate enough that it can get broken if it is dropped or banged around.

Things might not work out so great for your new top-of-the-line Laser Tag equipment if you turn it over to a 4-year old.

When Are the Best Times to Try the Game?

If you’re going to let a young child try Laser Tag for the first time and they will be playing at an amusement center, you need to consider the time of the game.

If the center has been rented out for a private party, then you’re probably going to be okay—if the other party attendees are the kinds of folks that you think will let the young child have a good time playing.

If the game is going to be played during open play time at an amusement center, it’s a good idea to call ahead and find out from the center when their peak hours are.

They will probably be able to point you to a time and day when the game will be less intense for your youngster.

Why Let a Young Child Play the Game?

The obvious answer is because it is fun. But only you can tell whether your 4-year old will actually have fun playing Laser Tag.

Every child is different, and not all of them are ready to enjoy Laser Tag at the age of 4. In addition to that, it’s also the case that some Laser Tag play would be hard for any child of four to enjoy.

That’s due to the ages of the other players, the space that the game is played in, the equipment, and more.

The bottom line is that you should spend some time thinking about whether the child will actually enjoy the Laser Tag experience. If you think that they will, then go for it.

Unlike some games and amusements, there is nothing about Laser Tag itself that makes it a bad idea for a child of 4.

There are no parts that they can choke on and nothing about the equipment that can hurt them. But the game can be hard to understand, and game-play can get intense.

Your child’s size and personality will help you make the call, but all of the issues we looked at in this article should factor into your decision.