Are All Paintballs The Same Size? Paintball is a competitive team shooting sport that is both fun and exciting! If you’re looking at taking up the sport, you will need specific equipment, the most significant being the marker (or marker) and the ammunition (or paintballs). Right now, you may be wondering to yourself, ‘are all paintballs the same size?’

Paintballs are available in a variety of different sizes, however, the .68 caliber is the most common and considered to be the standard size for paintballs. The second most popular size is the .50 caliber type.

Now that you know paintballs come in different sizes, let’s explore this topic further. We will discuss the difference between the .68 and .50 caliber options and explain why the .68 is the most popular. We will look at what paintballs are made of, how much they weigh, how fast they travel and how to choose between the different types. As well, we will review which paintball is the best and where to find it.

So, if you’re ready to learn all you need to know about the different types of paintballs, then let’s get started!

What Size Paintballs Should I Get?

Choosing the right paintball caliber is dependent upon the type of game you want to play and the size of your marker. The two main options include the .68 caliber and the smaller .50 caliber. Let’s explore each of these in more detail below.

The .68 caliber paintball is the industry standard and the most popular size, preferred by experienced players. They are very versatile and can be used in a variety of different games. They can also great for both indoor and outdoor fields of various sizes and layouts. Best of all, they have great velocity and a cool ‘splat’ when they hit opposing players.

The downside, however, is that these paintballs are heavier (and so are the markers that hold them). They are larger than the .50 caliber style, which means your marker will have fewer rounds. This may be a problem for beginners although experienced players, who can aim and shoot accurately, don’t seem to have an issue with it.

Keep in mind that a larger paintball will also hurt more when it hits you. If you’re new to the sport, this may bother you. And for kids that are 12 years old and just starting out, this may not be the best option. However, if your goal is to play professionally or in tournament-type situations, then you should ‘suck it up’ and opt for the .68 caliber!

The .50 caliber paintball has become popular recently with paintball players. They are often referred to as ‘low impact’ and smaller in size, perfect for beginners and kids (10 to 12 years old). They work great on indoor fields and a good choice for recreational games. They also don’t hurt as much when you get with them which is a definite plus!

The downside here, however, is that the balls are only ½ inch in diameter, resulting in less distance and reduced velocity compared to the .68 caliber option. At times, these paintballs won’t even break upon impact so you lose the cool ‘splat’ option. Although, you can fit more of them in the marker which means you don’t have to reload them as often.

The .50 caliber option is great for woodball games and allows you to shoot through thick brush, which can be difficult to do with larger-sized ammo. They are also cheaper than the .68 caliber style and from a value stand-point, the higher volume with more shots per round, make it the more cost-effective choice. In the end, the choice is up to you, depending on your gaming preference, skill level, budget and goals.

What is the Most Common Paintball Size?

As mentioned above, the most common paintball size is the .68 caliber, which is also considered to be the standard size. The ‘caliber’ of a paintball refers to its diameter in inches, but many factors affect the exact dimensions. Paintballs (and barrels) vary in size from .43 to .71 inches or caliber and are rarely perfectly rounded.

What is the Most Common Paintball Bore Size?

Bore size in paintball refers to the inside diameter of the marker barrel. Contrary to popular belief, bore size and paintball size are not always the same. Paintballs can vary in size depending on the quality, climate and manufacturer. In most cases, however, the size differences are minimal, if any.

The most common paintball size is the .685 caliber, as opposed to the .689 caliber. Choosing the correct bore size (and a good quality brand) will greatly improve your accuracy. The best way to find the right bore size is to match the paintball to the barrel is to place it inside – if it rolls out, it is too small and if it gets stuck, it is too big! Therefore, it is recommended to purchase the .684 or .685 barrel option.

Which Paintballs are the Best?

The best paintballs overall, based on price, caliber, durability, quality and efficiency, are the Valken Infinity Paintballs – 68 caliber, 2,000 count. 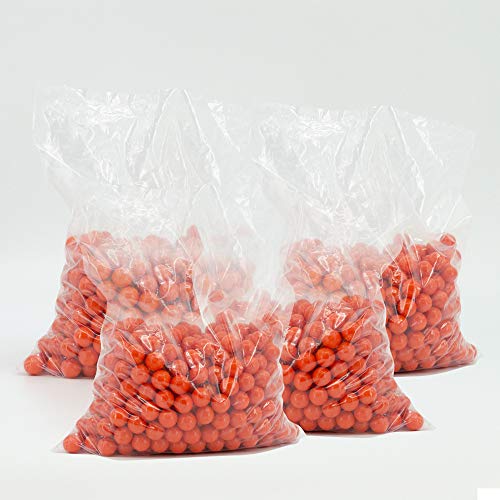 This is the go-choice of experienced players, especially those who compete professionally in tournaments. They are also great for beginners and come in a variety of colors including orange, yellow and white. They are a #1 Best Seller and affordable at less than $40 per box! Go online and check them out at Amazon.com today!

What are Paintballs Filled With?

All paintballs are filled with gelatin capsules containing polyurethane, glycol (PEG) and other water-based substances and dyes that are non-toxic. They are made from food-based products that are edible but taste terrible! Regardless of size, paintballs are considered safe for use by both children and adults. However, the contents can be dangerous to animals (if ingested), resulting in severe poisoning which can be life-threatening.

How Much Does a Paintball Weigh?

How Many Paintballs Fit in a Hopper?

A hopper, or loader, is a device that attaches to a paintball marker and holds the ammunition before it is loaded into the firing chamber. It can hold 180 to 200 standard paintballs, which are .68 caliber in size. Most modern markers can empty a full hopper in 10 seconds or less of constant fire!

How Many Paintballs Fit in a Pod?

A pod is one of the smallest pieces of paintball equipment and allows a player to refill a hopper as quickly as possible. It does this by letting the player dump paintballs directly from the tube into the hopper.

The most common pod size holds approximately 140 standard (.68 caliber) paintballs, although other sizes are also available that hold less – around 100 paintballs.

Which Size of Paintballs Hurts the Most?

In terms of pain, the largest the paintball, the more it hurts! Low impact paintballs are .50 caliber in size and weigh 1.25 to 2.2 grams. These paintballs hurt far less than the standard or .68 caliber size.

When hit with the .50 caliber ammunition, a player is likely to feel a pinch, similar to a ‘bee sting’ and is often left with a small, red welt.

How Fast Does a 50 Caliber Paintball Travel?

In general, a .50 caliber paintball travels approximately 300 feet per second (fps) or 200 miles per hour (mph). The smaller size and lighter weight allows it to move slightly faster than its .68 caliber counterpart.

According to experienced players, however, anything faster than 300 fps is too fast, adding unnecessary risk and increased danger to an otherwise safe sport.

How Fast Does a 68 Caliber Paintball Travel?

The standard paintball velocity is very fast! A .68 caliber paintball can reach a speed of 280 fps or anywhere from 163 to 190 mph. At this rate, a paintball can hit a target 80 to 100 feet away! Most players feel this speed of travel is sufficient (even though it is slightly slower) and will still choose the .68 caliber option over the .50 caliber type for its overall performance and value.

To conclude, paintballs are available in a range of sizes, from .43 caliber to .71 caliber. The .68 caliber is the most common and considered to be the ‘standard’ size. Choosing the right caliber depends upon the type of game you want to play as well as the size of your weapon or marker. Other factors such as skill level, gaming preferences, budget restrictions and future objectives also come into play.