Yes, Paintballs Expire. Here's How To Store Them Long-Term People might think that paintballs are invincible and long-lasting, but they are not. Paintballs are made using biodegradable components that steadily break down over time. This environmentally conscious manufacturing decision has a double-edged sword, which means one thing: your paintball will expire.

For best results, you should store paintballs in a cool, dry place, making sure to turn them over regularly.  This is the most bare-bones approach to extending the life of your paintballs. Some users are known to go one step further by storing their paintballs in a temperature-controlled facility.

The paintball itself is a spherical capsule made out of gelatin. It is no bigger than a dime and is contains a colored liquid, which is primarily a mix of dye and polyethylene glycol. Unfortunately, paintballs are ‘perishable’ items due to the nature of the materials used to make them.

Failing to properly store your paintballs will result in faster expiry. The balls will start to dimple, become soft and oblong, before losing their shape. The longer you leave them out in the open, the worse they will perform on the field.

You don't want a soft, misshapen ball getting stuck in your marker.

How to Store Paintballs for the Long-Term

You’re up against a timer the moment you open up a fresh bag of paintballs because their shells start absorbing moisture from the surrounding air and start swelling. Your best bet is to squeeze as much life out of your paintballs as possible. To do this, you should refer to the manufacturer’s instruction manual for specifics related to your paintball.

The gist of paintball storage is to avoid extreme temperature conditions and humidity because the paintball becomes soft and sticky, deforming overtime. Try to adjust the ambient temperature to the ‘goldilocks’ zone, which is neither too hot nor too cold.

At cold temperatures, paintballs can get very brittle which makes them very likely to break in the marker’s loader, carton, barrel, or hopper. Try to find a sealed bag to store your paintballs so they don’t dry out. When paintballs freeze, they start contracting in size, which means you may have to change the size of your marker barrel to prevent the pellets from rolling out. The biggest sign that your paintball pellets have frozen is if you see dimples form on them. Any type of deformity on your paintballs renders them useless to you. When this happens, there’s a good chance they will break in your barrel and create a huge mess.

Store your paintball in a place away from direct sunlight. The objective is to reduce the paintball’s exposure to UV rays as much as possible. If done right, you can extend the shelf life of your paintballs from 4 months to 12 months without going through major detrimental effects. Just remember the golden rule: keep the paintball between 50 °F to 90 °F in a low-moisture environment. Remember to rotate them every so often and you’ll be fine.

If you are running between paintball games, it is a good idea to store them in an air-conditioned car if possible. You could also buy an insulated cooler to protect your paintballs from outside elements. Just make sure to not use ice bags or ice blocks in the cooler because they may melt and ruin the pellets. If you want to use coolers, try to find sealed plastic packs to prevent liquid water from getting inside.

How to Tell if Your Paintballs Have Gone Bad

There are certain telltale signs that your paintballs are beyond cleaning and repair. If you notice the following oddities with your paintball, it is best to discard them:

How to Discard Old and Broken Paintballs

Drop them in trash cans, lawn, rivers, or the paintball field, and no harm would be done. The only danger associated with paintballs is that they are a choking hazard for small children and pets. They may be tempted to eat the paintballs out of curiosity only to wind up with a severe electrolyte imbalance. If you think your pet has eaten paintballs, take them to the vet immediately for treatment. 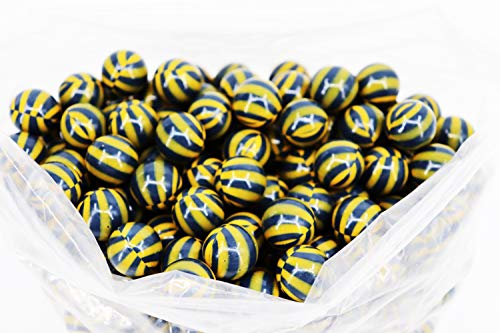 How to Clean Paintballs

Most good quality paintballs are ready to use straight out of the bag. But if you find bits of broken paint in the bag, you should clean the rest of the paintballs because it more than likely means there is some paint smeared on nearby paintball shells.

It is hard to miss broken paintballs because they leave a thick, cloudy residue in your plastic bag. You may also find cracked or broken paintball shells in the bag, if so, remove these before cleaning.

That’s it. Your paintballs are now clean. Do keep in mind that this method only works for paintballs that have come in contact with broken paintballs or have accumulated layers of oil on their surface. If you accidentally dropped your paintball on the floor, such as in the field or at the paintball field, it is recommended to discard them instead of cleaning them. All the debris or grit they have accumulated will potentially scratch your barrel and affect your shot.

How NOT to Clean Paintballs

You may be tempted to use moist towels or even water to clean your paintballs. This is not a good idea because paintball shells are deliberately designed to break down by the action of water. Once they come in contact with water, you increase the risk of the paintballs breaking in your hopper or marker.

5 Factors to Consider When Buying Paintballs

Remember this rule of thumb: paintballs made using cheap quality of materials tend to break easily. Here’s a checklist to help you buy paintballs:

If you’re a first-time buyer, go with budget-friendly options to get the gist of paintball as a sport. As you learn more about storing paintballs, you can upgrade to more expensive options.

The term ‘caliber’ denotes the diameter of paintballs.

.68 caliber means the paintball is .68 inches in diameter.

Popular caliber options include .40, .50, and .62 calibers, among others. The .50 caliber is a popular choice for low-impact games while.43 caliber is used during tournaments. Make sure the paintball can fit inside the paintball marker. If you don’t have a suitable marker, you could always buy conversion kits to modify almost any paintball marker from one caliber to another.

To keep your paintballs from breaking inside the firing chamber of the marker (or even exploding mid-air), you have to buy durable paintballs. Make sure the paintball’s outer shell is tough and thick. There should be no signs of dimples, swellings, or any other deformations that could hinder performance.

You can test the durability of paintballs by doing a drop test from over six feet. Take a handful of paintballs and drop them until they break. If the shell cracks before making it to the third round, it is too weak and not ideal for use on the field. If it cracks on the seventh consecutive drop, it’s a sign this is a good batch of paintballs.

You should be able to test how far the paintball travels before veering off course. It is not unheard of for low-quality paintballs to burst in the mid-air.

5. Type of Paintball (Professional vs. Recreational)

During paintball tournaments, try to opt for the tournament or professional-grade paintballs because they have a firm but thin shell that breaks easily and consistently. These paintballs are made using high-quality materials and are a lot more reliable than the paintballs used in leisurely paintball games.

But if you are playing paintball for recreational or practice sessions, you can buy reusable paintballs. These paintballs are low-quality and affordable, and they can get the job done.