How Many Paintballs Do You Need for a Day? To play paintball, you need the proper equipment and plenty of ammunition! If you happen to run out of paintballs halfway through your game, you won’t be able to defend yourself or take out your opponents.

Right now, you may be wondering to yourself, ‘how many paintballs do I need per day?’

So, if you’re ready to learn more about the exciting game of paintball, then let’s get started!

How Many Paintballs Do You Need for 2 Hours?

The average player uses approximately 100 to 150 paintballs per hour. Therefore, a 2-hour game will require at least 200 to 300 paintballs (give or take), depending on skill level, playing position, shooting style, game type and individual mood.

Let’s take a closer look at each of these factors below.

Skill Level Will Affect How Many Paintballs You Need

Skill level will often affect the number of paintballs needed per game/day. Experienced players who are able to line-up their shots and accurately hit their targets will use less ammunition than beginners who simply aim and shoot at random.

Novice players should pack an additional 100 paintballs on game day, for a total of 500.

The position you play will also determine how many paintballs you need. If you play ‘Backman’ position or part of the infantry, you will shoot a lot more, as you are required not only to control ambushes but defend your teammates as well. Therefore, you will probably need an extra 100 paintballs in addition to the 400 you will likely use.

Frontman and Sniper positions, on the other hand, don’t shoot as often, as they are responsible for either completing the mission or taking out targets. With that in mind, 400 paintballs should suffice, however, you could bring extra if you’re feeling ‘trigger happy’ on game day.

How you shoot will also determine how many paintballs you use. Some players use a "spray and pray" technique, which is the continuous firing of ammo.

Rather than taking the time to accurately line-up a shot, the "spray n pray" technique involves simply ‘firing at will’ in the general direction of an opponent. Needless to say, this style requires more ammunition than 500 paintballs per day).

You can make your paintballs last longer by shooting in short bursts. By firing in 3 ball bursts, you save your ammunition and can have a more targettted attack.

The style of game you choose to play will also affect the number of paintballs used in a day. In scenario games, the story-line you choose (such as historical re-enactments, futuristic plot-lines or video game simulations) will also determine how much ammunition is needed.

Players often attest to using more ammunition when playing scenario games, as opposed to woodball or speedball games. Therefore, at least 500 paintballs per day is recommended for this type of game play. Again, it is better to have too many than not enough!

Woodball games use approximately 200 paintballs per hour, taking into consideration the size of the field and the number of players participating. Since you tend to do more running than shooting in this type of game, you could get away with a mere 150 paintballs.

With the average game lasting 2 hours, anywhere from 350 to 400 paintballs per day should suffice.

Speedball courses tend to be played in a smaller area with less running and more shooting action. These courses require, on average, 200 to 300 paintballs per hour. Therefore, a 2-hour game would necessitate approximately 400 to 500 paintballs per day.

Your mood or disposition can also affect how many paintballs you use. If you are in a particularly aggressive mood on game day, you should take an extra 100 paintballs! On ‘trigger happy’ days, you will probably use more ammunition as well.

If you are playing a recreational game as opposed to a tournament game, you may not need additional paintballs. Playing for fun is not as intense as playing in a competition, therefore, so you are likely to feel calmer and more relaxed, less combative or ‘trigger happy’.

In the case of ammunition, more is always better! If you run-out of paintballs mid-game, your only options are to find a friend and borrow some or eliminate yourself. Running around asking others for more ammo gives your opponents the perfect opportunity to take you out! As well, stopping to reload your marker wastes valuable game time and reduces your chances of eliminating opposing players.

How Long Will 100 Paintballs Last?

If you’re playing on a tournament-style field, a typical game lasts only about 5 to 10 minutes so 100 paintballs should be enough, provided that you are conserving your ammunition and shooting only at people, not walls, floors and bunkers! It is best to err on the side of caution and add an additional 100 paintballs, just to be sure you have enough to last the day!

How Long Will 500 Paintballs Last?

Paintballs are often sold in packages of 500. Therefore, let's talk about how long will 500 paintballs last?

A package of 500 paintballs should last you 3 to 4 hours. Every player is different, depending on the style of your game, your shooting style and the size of the course you may need more.

When you are playing for a longer time frame, you will want to keep an eye on your usage. Shoot using short bursts more often than by "spray n pray" methods will use less paintballs and allow you to hit more targets.

How Much Do Paintballs Cost?

The cost of paintballs varies depending on both quality and quantity. Cheaper ammunition is around $30 for a case of 2000 rounds or $10 for a box of 500. Professional grade or tournament-type ammo can cost up to $80 for a case of 2000.

Where Can I Buy Paintballs?

Paintballs are available at online retailers or at local sporting goods stores. Buying online from Amazon.com is a great way to purchase paintballs – it is convenient, affordable and best of all, can be delivered right to your mailbox or front door in as little as two days! 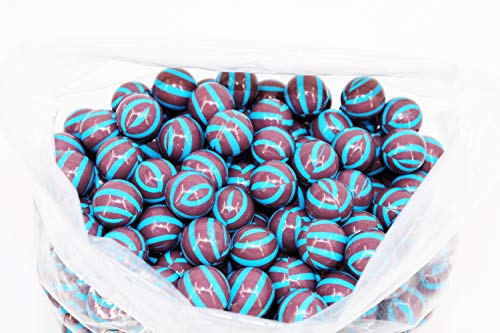 One good example is Valken Infinity Paintballs – 68cal/2000 ct. They are a #1 Best Seller and come in a variety of colors such as orange, yellow and white. They are also very durable with a thicker shell, perfect for entry level players. I find that Amazon offers very good pricing, check current Amazon, click here!

How Many Paintballs are in a Case?

The standard case of paintballs comes in box containing 4 bags of 500 paintballs each, for a total of 2000. If the average game uses 400 to 500 rounds, one case should last up to four days of play.

How Many Paintballs are in a Hopper?

A hopper is a device that is attached to a paintball marker and is often referred to as a loader. It houses the paintballs before it is loaded into the firing chamber. Most hoppers can hold 200 paintballs, which is the amount needed for approximately one hour of game play.