Are All Paintball Hoppers Universal? Although there is no single manufacturing rule governing hopper specifications, almost all paintball hoppers manufactured after 2007 are universal in size. Hoppers produced before 2007 are, for the most part, incompatible because the feedneck can only incorporate a small range of sizes.

This means you can swap out your older paintball hopper in place of a faster, bigger hopper. The federate - or the speed at which the hopper can load the balls into the firing chamber - depends entirely on the loading mechanism. The speed range for paintball hoppers varies from as low as 4bps to 40bps.

Why Care About Different Paintball Hoppers?

At the end of the day, paintball is all about performance. Most starter paintball markers come with standard hoppers that feed ammo into the marker at a slow speed. These ‘stock’ hoppers put you at a clear disadvantage if your adversary (on the field) can load their paintball marker quicker or has a much easier time reloading.

Sometimes a faster, more efficient paintball hopper is all it takes to upend the competition. Now if you want to level the playing field, you will have to look for aftermarket options. This is where paintball hopper compatibility comes in, which as described, are 100% compatible if the marker was manufactured at least 10 years ago.

How to Find the Best Paintball Hopper for your Marker?

When you’re in the market for paintball hoppers, don’t just settle with the cheapest hopper you can find. Search for paintball hoppers with the largest container and the smallest profile. For instance, the mouth should be wide enough for easy and fast reloading. This is important in a fast-paced high-stakes situation because even 200 round hoppers will be emptied fairly quickly.

Your new hopper should only take a few seconds to reload in the middle of the fight because the longer it takes, the more emboldened your opposition becomes. The capacity of the paintball hopper is important too because it will dictate the speed of your game. Some of the largest hoppers can carry up to 400 paintballs, double what most stock hoppers can hold. It will be a while before you’ll need to reload in the middle of a firefight.

But there’s a caveat. 400-round hoppers at maximum capacity can add lots of weight to your paintball marker and restrict your movement as a result. Even tiny bits of weight can slow you down and make it more difficult to wield paintball markers. Some people prefer hoppers that are attached to the top of a marker for convenience (and faster loading), but the weird positioning and added weight can skew the balance of your marker, leading to a loss in shooting accuracy.

If you prefer faster movement on the field, choose smaller hoppers for more agility. You could even go for the cheapest, smallest paintball options with a carrying capacity of only 25 rounds (or 9 in case of pistols). The only catch is that you will have to make each shot count. Use small hoppers only if you are a ‘natural shooter’ with reasonably high accuracy. 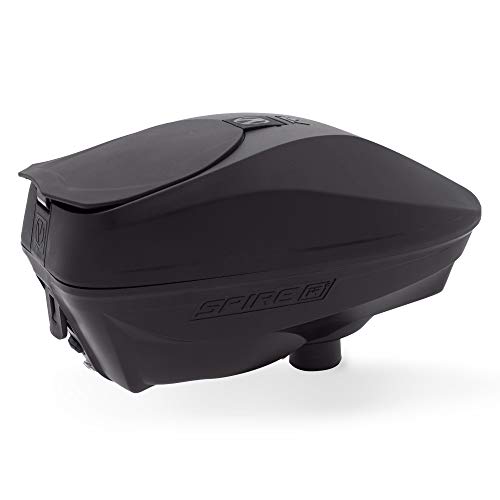 Most paintball experts choose a hopper depending on their position in the field. For instance, if you have a small capacity hopper with extremely fast reload time, you should play on the front lines for faster gameplay. If you have a high-profile paintball marker, choose large hoppers to provide uninterrupted cover fire for your allies on the front line.

Some paintball hoppers also come in different camouflage patterns and colors to help match your tactical outfit or competition gear. This may offer you a strategic advantage of your adversaries on the field.

There is one general rule of thumb you should always stick with: buy a hopper that can load paintballs faster than your paintball marker can shoot it.

If the hopper can’t load faster than the marker can fire it, you would notice a delay between pressing the trigger and the loading time for the next paintball. In many cases, players prefer to match mechanical paintball markers with gravity hoppers since they provide decent capacity for one session. If you have an electronic paintball marker, then your best option would be to find an electronic hopper.

But before you buy an aftermarket paintball hopper, you should get familiar with their loading mechanism.

There are four main types of paintball hopes: agitating, force-fed, stick fed, and gravity fed. This section will highlight the differences between each type.

Agitating loaders utilize spinning propeller or paddles inside the container to keep the paintballs in a constant stand of movement. This prevents the marker from getting jammed in the process - allowing the container to guide the paintballs to the feed neck – this, of course, requires energy, a scarce resource on the field. Agitating hoppers are typically used in more professional settings due to their higher rates of fire. 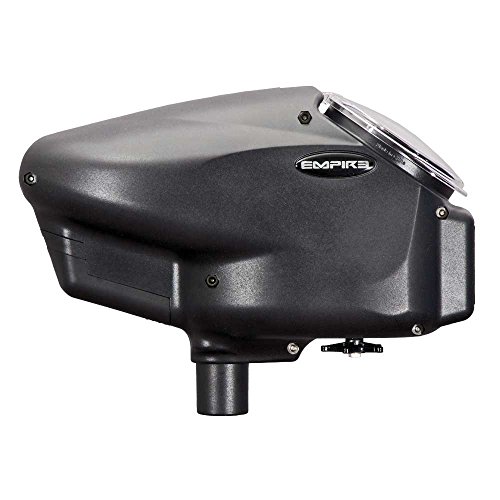 Agitating hoppers are subdivided into two more subcategories – those with eyes and those without. The ‘eyes’ consist of a sensor - such as a photodetector or an  LED - inside the hopper’s neck or tube to detect paintballs.  If the eyes detect an absence of balls, they cause the motor to agitate the balls. Agitating hoppers without sensors will quickly deplete and in some cases, even damage the paintballs.

This is bad for the paintballs because when the ball breaks, its paint leaks into the hopper, thereby speeding up the deterioration of gelatin balls, which causes the balls to stick together. It may take more than just a tap on the paintball marker’s butt or a few violent shakes to get rid of the jam.

These hoppers rely on an impeller to guide paintballs into the marker. The impeller is either powered by a belt system or spring-loaded; this tension ensures that a certain minimum temperature is maintained on the stack of paintballs at all times. Force feed hoppers can feed paintballs at up to 50 balls per second since the mechanism relies on the potential energy stored in a spring, not gravity.

This is why force-feed hoppers are preferred over agitator hoppers because of their reasonably high rate of fire. Some higher-end force-feed hoppers use radio frequency to communicate wirelessly with the marker’s electronics. This allows the loader to feed paintballs well before the pneumatic system of the marker needs to load the next paintball. This increases battery life since the hopper is only activated when the marker is about to fire, eliminating misfeeds, and substantially increasing the speed of the loader.

Stick feed hoppers are installed by default on most paintball markers. These mostly consist of PVC tubes that can hold between 10 to 20 paintballs. These hoppers are usually arranged in a position that is horizontal to the marker’s barrel. Loading is slightly more complicated, requiring the player to slightly tap the marker to reload.

The simplest and cheapest option on the market is a gravity-feed hopper made using only a shell and a lid. This device consists of a feed tube swirling towards the bottom and a large container. 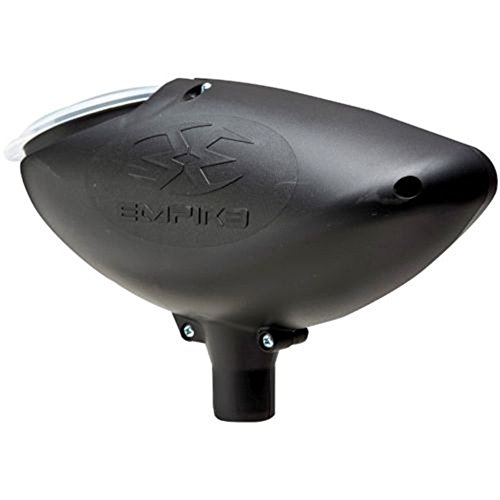 The paintballs rely on gravity to roll down the tube, through the sloping sides, and into the barrel. Gravity feed hoppers have low loading rates. This presents ample opportunity for the paintballs to jam into each other as they are forced by gravity. Vigorously shaking, rocking, and tapping at the marker may free up the balls and guide them into the barrel.

Depending on the type of paintball hopper you own, the techniques for maintenance will vary. If you have an electric or spring-loaded hopper, make sure to empty the balls to preserve spring strength, thus maintaining reload speed and causing fewer paintball jams. If your hopper uses gravity-based movement, add a drop of lubricant inside the internals to reduce friction form all components in the hopper.

Can I Use Electric Paintball Markers with Gravity Hoppers?

While you can use electric paintball markers with gravity hoppers - the main issue doesn’t boil down to size since most hoppers are the ideal size - an electric marker simply can’t provide enough force to jostle the pint properly. Gravity hoppers usually can’t keep up with the high firing rate of most electronic paintball markers, which is why it makes sense to use them with mechanical markers only.

So there you have it, most paintball hoppers are universal in size. But our advice is to stick with mainstream manufacturers just to be on the safe side.