What is the Difference Between CO2 and Green Gas Airsoft Pistols? 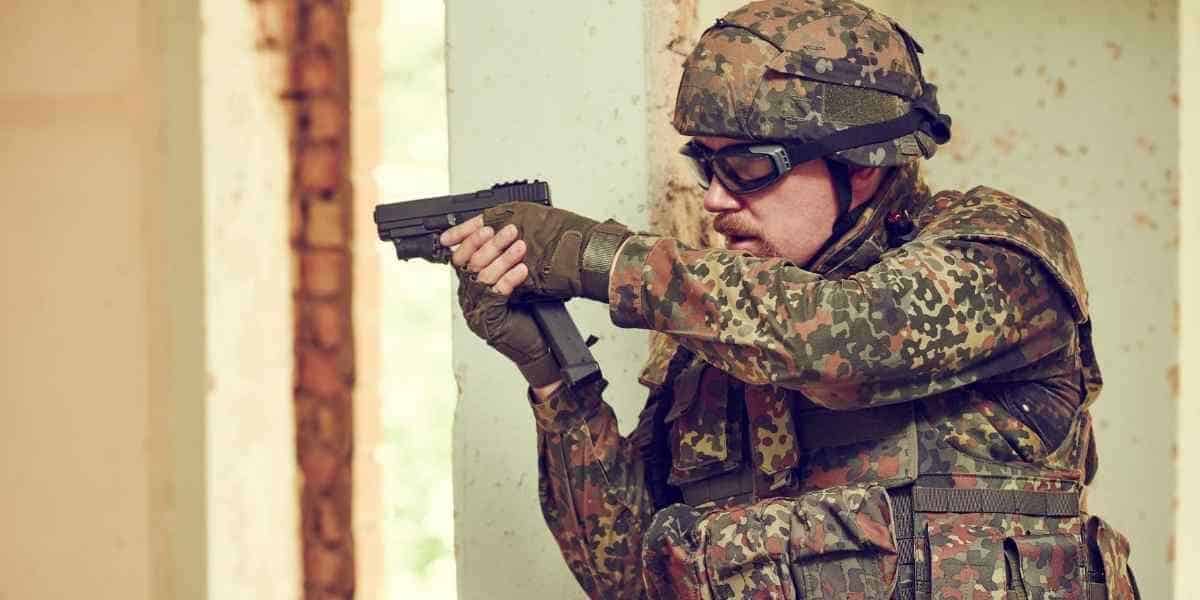 There is no doubt that Green gas is the most common of these two. However, there are still shooters who prefer the effect of a CO2 powered gun. Do you want to know why?

The difference between CO2 and Green gas airsoft guns is in the propulsive effect they give off when shot. CO2 which is purely carbon-dioxide gives off a powerful kick when shot giving it a stronger effect whereas Green gas which is made from Propane with silicone oil added gives off a softer but still effective shot.

CO2 gas refers to pressurized Carbon-dioxide which usually goes into a 12g canister that is about the size of a thumb. This canister is then inserted into the magazine of the pistol.

The gas has a span of 30-50 shots per cartridge which might seem little for some shooters. However, the shot from a CO2 gas gun is packed with lots of power.

This is still the most used gas by shooters due to its affordability. Green gas is made from propane with silicone oil added and the smell removed (ordinary propane has a smell which could be unpleasing to the shooter).  It usually comes in a bottle which is then filled into the magazine with the aid of an adaptor.

Green gas is filled directly into the magazine. This allows you to get more shots than you would when using the CO2 gas, but it also exposes your gun to reduced functionality in cold environments. Green gas is much easier on the gun and provides a form of lubricant to the gun when shots are taken which ensures that the gun lasts long and reduces the frequent need for maintenance.

Green gas and CO2 are the two main types of gas used to power gas airsoft guns. Which is better amongst the two the depends on the preference of the shooter. With the aid of the table below, we will highlight the differences between CO2 and Green gas.

It is important to note that the cool-down effect refers to the gas and the magazine getting cold after continuous firing, which therefore reduces the power of the gun.

It is also worth noting that Green gas pistols can run other variants of gases. These variants include high-pressure gases such as red gas and black gas and low-pressure gases duster gas which offers even less stress on the internals of your gun than the standard green gas.

Propane is green gas without silicone oil which serves as a lubricant for the gun. Propane gives off a smell of Sulphur which most shooters won’t be comfortable with.

Although it is cheaper than Green gas, it increases the wear on your gun due to the lack of lubricant. It also has a stronger psi than regular Green gas.

Red gas is tagged as a chlorofluorocarbon, which means it is a gas that contributes to the depletion of the Ozone layer. It has however been banned by the United States and many other countries.

Red gas was however made to make up for the deficiencies other gases had in a colder environment. With red gas, there would not be a slowdown in the mechanism of the gun when playing in cold regions.

In normal conditions, the red gas has an extremely high fps and would greatly increase the wear on your gun.

This is a cheap and effective variant of the green gas which offers an incredibly soft kick causing little to no stress on the internals of your gun.

Duster gas is compressed air which can be used to clean electronic equipment that cannot be cleaned with water.

Black gas is seen as the highest pressured gas there is with very little guns being able to handle the kick it creates. The pressure from this gas is capable of destroying most airsoft guns after just a few minutes of use and it can cause real damage to the opponent on impact.

Black gas is quite suitable for use in cold environments. Overall, it is not advisable to make use of black gas when playing airsoft as this can cause major damage to your gun and opponents.

Can a CO2 Airsoft Guns Use Green Gas?

A lot of shooters often speculate on the possibilities of using CO2 to power a Green gas gun and several tests have shown that it is possible. However, due to the immense pressure from CO2 and the delicate internal design of Green gas guns, the gun would wear down in no time.

Knowing this then begs the question; if CO2 shouldn’t power a Green gas gun, can a CO2 Airsoft gun use Green gas?

Well for ordinary airsoft guns, the answer is no. The way CO2 guns are designed, the pressure from the CO2 is essential to allow for the blowback process. The pressure from Green gas is not strong enough to allow the gun function properly. However, some guns have been modified to allow this to happen.

A common example of a gun that has been modified to be able to accept either CO2 or Green gas magazine is the KJW M9A1.

Is green gas or co2 better for airsoft?

Do you like to go for power, or you like to be more conservative while playing? Then these preferences will dictate the kind of airsoft gun you would pick. The weather in which you are playing should also affect your choice of gun.

So, when trying to answer the question ‘is Green gas or CO2 better for airsoft?’ you’ll have to put into consideration the following factors: mode of game you are playing and the weather. CO2 is better for cold environments and fast-paced games while Green gas is better for long conservative games.

When playing a fast-paced and high press game, a CO2 gun may be a better option due to its quick firing rate and high FPS. CO2 ­also out-performs Green gas in cold environments given that the gas is stored in a canister which is then inserted into the magazine as opposed to Green gas which is stored directly into the magazine.

When playing long conservative games that require you to conserve your gas, then green gas might be a better option for the shooter. Green gas also offers a cheaper refill option which is an advantage that makes it popular amongst airsoft shooters.

What is the Difference Between CO2 and Electric Airsoft Guns?

Electric guns are the most used types of airsoft guns amongst shooters. They usually come packed with rechargeable batteries and a charger for the battery. Most electric guns usually have different selective modes that allow shooters to switch between full auto mode, semi-automatic and single fire modes.

Below are the major differences between CO2 gas guns and Electric airsoft guns.

Asides the obvious difference in these two guns, they are quite similar in terms of aesthetics and accessory upgradability.

Which is better CO2 or electric airsoft guns?

Electric airsoft guns are by far the most popular of all the types of airsoft guns, but this does not mean that they are the best option. Deciding which is better of the two depends on the shooter and their preference.

Asides the fact that refilling CO2 gas might be a bit expensive, a CO2 gas gun will present itself as a better option when compared to an electric gun given its better range, accuracy, and FPS. However, an electric gun as a quicker trigger response and firing rate.

So, the choice is yours. Do you want range, accuracy, and power, or do you prefer the ease and a quick-firing rate?

Gas guns like the CO2 and Green gas are common picks amongst shooters because of the realism gotten from the blowback system.

The blowback system is a process when pneumatic potential energy stored within compressed gas drives the propulsion of the BB bullets which simulates a recoil.

Do you want to know how this blowback process works? Then read our article on ‘How do CO2 Airsoft guns work?’.

Gas-powered guns can be seen to work differently from spring and electric airsoft, but this difference makes it unique. What do you think?