The need for added realism while using electric airsoft guns is one of the main reasons that led to the birth of the Electric blowback airsoft collection. Often, when we hear the phrase ‘blowback’ in airsoft, our minds instantly think about gas-powered airsoft guns.

However, electric airsoft guns could have the blowback feature as well. Even though they are not as common and prominent as the gas blowbacks, they do exist. 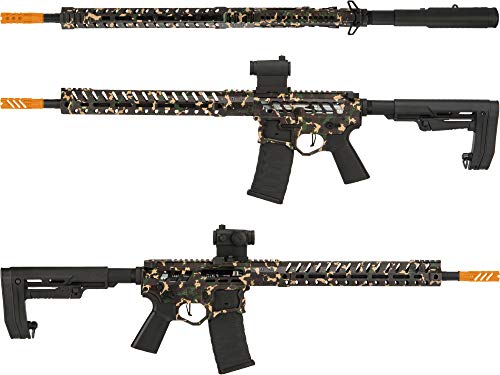 Electric blowbacks guns (also referred to as EBBs) are high-end Automatic Electric Guns (AEGs), and they usually operate on rechargeable 9.6volt battery. The mechanism of the EBB gun involves the gearbox moving the springs that then pushes the piston back to stimulate a recoil which is the blowback feature we see when the rifle is fired.

Secondly, the blowback feature can create more stress on the gearbox of the gun thereby resulting in a shorter lifespan for the gun.

If you crave for the added realism gotten from the blowback feature of airsoft guns and you also want a powerful electric rifle, EBBs are the way to go.

We will also be comparing them with each other by making use of a table showing the different features unique to each gun.

So, do you want to know what the best electric airsoft rifle is? Well, keep reading to find out! 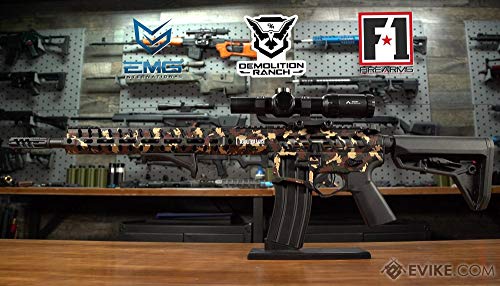 This airsoft rifle is a replica of an actual AR15 rifle that costs thousands of dollars. It is almost difficult to differentiate the actual firearm from the airsoft rifle due to how similar the two guns look.

This airsoft rifle was created from the combination of three different airsoft companies: demolition ranch, EMG, and F-1 Firearms.

Our pick for the best runner up is the Bolt Airsoft B4A1 Elite DX Enhanced B.R.S.S Electric Blowback Airsoft AEG. This rifle costs only $290 and weighs approximately 6.6 pounds.

This high-end airsoft rifle offers numerous features at an affordable price. Its main features and specifications include:

Our pick for the best budget is the APS Kompetitior Electric Blowback Rifle. This rifle costs only $120 and weighs approximately 8.3 pounds.

When comparing with other higher-end airsoft rifles, this gun can hold its ground comfortably even though it is much cheaper than other quality guns. This gun offers a mixture of quality and affordability.

If the other airsoft rifles listed above are not available, my pick for the 1st best alternate rifle is the G&G TR15 Raider Airsoft Electric Blowback AEG Rifle. This electric airsoft rifle costs about $335 and weighs approximately 4.7 pounds.

By chance, if all the other rifles listed above are not available, then our pick for the second-best alternate electric gun is the APS ASR116 Electric Blowback Airsoft M4 AEG. This electric rifle costs $280 and weighs approximately 7 pounds.

Its features and specifications include:

You will find below a comparison table of all the airsoft rifles listed above. This table will compare factors such as price, muzzle velocity, length, battery power, and magazine round.

Electric airsoft rifles are by far the most popular amongst the type of airsoft guns mainly because of their ease of use and quick-firing rate. Electric blowback airsoft rifles go a step further by giving the regular AEGs we know and love a higher level of realism by including a blowback recoil feature.

So, do you want a high firing rate, ease in shooting, and a realistic recoil effect? Then an electronic blowback airsoft gun might be the best option for you.

What is an electric blowback airsoft rifle?

So, what is an electric airsoft gun? This type of airsoft gun is powered by a rechargeable battery and this battery powers the inbuilt motor that transmits power through a gearbox to compress the piston-pump spring which then leads to the pellets being propelled from the gun.

Blowback on the other hand refers to the simulation of recoil by the bolt handle of the airsoft gun. Usually, blowback is a self-loading operation in gas blowback guns, that uses the pneumatic energy to load pellets into the barrel of the gun.

How do EBBs work?

The mechanism of the electric airsoft gun requires the following parts to function properly:

The battery is connected directly to the gun’s electric motor. The motor is equipped with three plastic gearbox wheels that compress the bolt up against the firing spring. Once the bolt is fully compressed against the spring, the shooter then pulls the trigger.

The trigger thereby sends a signal for the gears to release and allow the firing spring to release the bolt forward at a rapid rate. While the bolt is held back, the air gets trapped in between the bolt and the BB.

When the bolt releases, an incredible amount of air pressure builds up behind the BB thereby firing it out of the gun at a great velocity which could reach 500 fps.

Electric blowback airsoft guns usually have a second motor whose main function is to power the piston which stimulates the recoil. The recoil however means that the battery gets depleted faster and could mean a shorter lifespan for the gun.

In electric blowback airsoft rifles, the blowback effect gotten from the movement of the piston is simply to give shooters the added realism and this feature can easily be removed after a few adjustments.

However, in gas-powered airsoft rifles, the blowback process is a self-loading process where BB pellets are loaded into the barrel of the gun. To know more about the blowback process and the different parts of the gun involved in the process, read up our article that talks about ‘How do CO2 airsoft guns work?’

What is an AEG rifle?

An AEG refers to an automatic electric gun that makes use of an electric motor that is powered by rechargeable batteries to carry out full-auto or semi-auto shots.

What battery size should I use for my gun?

They are different battery sizes which can be used for electric airsoft guns such as 7.4v, 8.4v, 9.6v, 9.9v, and 11.1v. it is advisable not to use a stronger battery size for your gun than what was advertised unless your gun has been modified to take it.

A stronger battery size could cause damage to the trigger or the blowback piston. Electronic blowback airsoft guns are usually modified to handles 9.6v batteries with some having special enhancements that allow them to run even 11.1v batteries.

The maH (Milliamp Hours) of the battery, on the other hand, indicates the power of a battery. It shows its run time from when its fully charged to when it is depleted.

How do I disable the blowback feature on my electric blowback gun?

Different guns have different methods of disabling their blowback feature but what is common amongst everything is that it is essential to remove the gearbox of the gun to disable this feature.

As mentioned above, there are various methods to disable the blowback feature, depending on the airsoft rifle. So, if you wish to this feature in your gun, simply look it up or contact the manufacturers for support.